Why superjobs are the missing piece in your automation strategy

Seek the human dimension of work and you shall reap automation benefits. Read the latest analyst insight and expert views on how to manoeuvre strategically amid the automation landscape to harness the greatest business value from new technology

This is the fourth industrial revolution. And the impact of automation is undeniable.

When McKinsey Global Institute listed 10 disruptive technological advances that will transform life, business and the global economy, it listed automation as second only to mobile internet technology in its potential impact.

But, while businesses are starting to invest more and more in the latest intelligent automation technologies, it’s more and more transparent that the technology alone is not enough to realise its full impact.

Some analysts are going so far as to call out such technology as robotic process automation (RPA) as dead in its solo progression. In the latest blog post by HFS Research’s Phil Fersht, he says, “Despite offering clear technical capability and the real advantage of breathing life into legacy systems and processes, RPA hasn’t inspired enterprises to rewire their business processes – it’s really just helped them move data around the company faster and require less manual intervention.”

Phil believes enterprises will ultimately struggle to scale automation adoption while busying themselves with piecemeal tasks.

“In many ways, technology has leaped ahead of leaders and organisations, and the human element needs to catch up,” says the report. 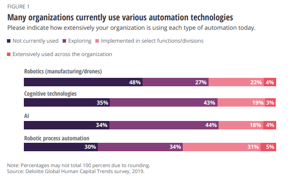 The report shows organisations expect to increase – or even significantly increase – the use of artificial intelligence (AI), cognitive technology, robotic process automation (RPA) and robotics over the next three years.

Now that organisations have started using these technologies, enterprises are seeing the benefits and investing heavily in them. Deloitte warns that jobs must now be completely redesigned around this ‘human dimension’, or companies risk limiting automation’s potential.

“When parts of jobs are automated by machines, the work that remains for humans is generally more interpretive and service-oriented, involving problem-solving, data interpretation, communications and listening, customer service and empathy, and teamwork and collaboration,” says Deloitte.

“As organisations adopt to these technologies, they’re finding that virtually every job must change, and that the jobs of the future are more digital, more multidisciplinary, and more data – and information-driven. Paradoxically, to be able to take full advantage of technology, organisations must redesign jobs to focus on finding the human dimension of work.

“If organisations take existing tasks and simply automate them, there will likely be some improvement in throughput – but if the jobs and the work are redesigned to combine the strengths of the human workforce with machines and platforms, the result can be significant improvements in customer service, output and productivity,” says the report.

As machines replace humans in doing routine work, jobs need to evolve to reframe human competencies. Deloitte calls these new roles “superjobs”: “jobs that combine parts of different traditional jobs into integrated roles that leverage the significant productivity and efficiency gains that can arise when people work with technology.”

There are signs businesses are beginning to adapt to a new way of working. The report shows 62% of businesses are using automation to eliminate transactional work while 47% are augmenting existing work practices to improve productivity and 36% are ‘reimagining work’ altogether.

The experts' views: How should you prepare for superjobs?

Kit Cox, CEO at Enate, says, “The promise of superjobs is exciting but requires bold managers and leaders to take it forward.

“Don’t leave the gristle and expect humans to swallow it. I recently visited a ‘robot coffee shop’ in San Francisco where robots magically made your flat white for you. The problem was: the robots didn’t magically fill the bean hoppers and fill the cup hoppers. This was left to some poor lacky. All the tasty parts of the job had been eaten out leaving only mundanity requiring some flexibility. Take this approach and you will find customers receiving a terrible product or service damaging your brand. Evidence? 9.30am Tuesday morning downtown San Francisco, the home of coffee and tech, and an EMPTY COFFEE SHOP!” says Kit.

He adds, “You need to liberate the ability to be human and break the rules. Imagine every example of extraordinary customer service that you’ve seen go viral. How many of those were where somebody was actually following the rules? Smart companies will create superjobs that liberate people to think and act in the company interest within broad constraints but without a rigid ruleset.”

"Who would've predicted massive financial institutions and banks would be threatened by digital payment platforms or even a one-person-invented cryptocurrency?! These platforms have not just plugged automation into traditional banking processes, but have “re-imagined” how to manage financial transactions from a clean slate. Most of their teams will be far more superjob-skilled at managing finance tech platforms with built-in accounting systems than their traditional banking counterparts with deep accounting skills. And, ultimately, we all know who’s going to win that race ..." adds Uday.

"So, think strategically and start your journey to re-imagining how you can adopt different “future-of-work” technologies coming to market in a structured, low risk way. Re-imagining work is not complicated, it just requires the willingness to break free from dogma and focus on better ways to get to your goals," he advises.

How do businesses prepare for superjobs? 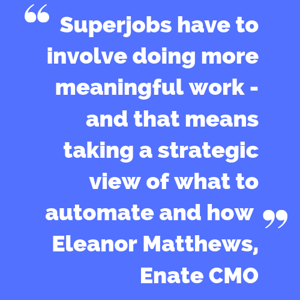 Eleanor Matthews, CMO at Enate and a sourcing expert, advises, “for organisations to successfully establish the superjobs of the future, and for people to embrace them, they need three features:

“Firstly, superjobs cannot just mean doing more work (a broader variety of tasks that happen to be the things that machines can’t do). Superjobs have to involve doing more meaningful work - and that means taking a strategic view of what should be automated and how.

“Secondly, technology needs to either replace (and remove humans from the loop for certain tasks) or augment (providing information, context or shortcuts to allow people to be more effective in performing their tasks).

“Finally, technology must reduce the cognitive load associated with context switching that’s inevitably going to be part of the superjob. If that isn’t the case, then people in ‘superjobs’ will end up super exhausted and burn out. This means providing information and decision support tools to the worker in real-time.”

Service orchestration does this. A future workforce of humans, robots and other technology agents need a way of working together. Enate is a service orchestration platform that orchestrates work across a hybrid workforce so you get the right worker (human and/or bot), for the right task, at the right time with complete control over complexity, visibility and cost. Enate's open platform enables automation at scale through instant, common governance across different vendors and technologies.

Big brands – such as Mizuho, Generali and Capita - trust Enate to help them gain control, scale automation, increase productivity and achieve insight. Should you, too? Request a demo.