You’re familiar with the rhetoric. Automation is happening. Robots are coming. Humans will be eliminated. But industry analysts are steering our focus away from automation and raise our sights to artificial intelligence (AI) augmentation.

According to Gartner, AI augmentation or augmented intelligence will create $2.9 trillion of business value and lead to an increase of 6.2 billion hours of worker productivity, globally.

“Augmented intelligence is all about people taking advantage of AI,” says Svetlana Sicular, research vice president at Gartner. “As AI technology evolves, the combined human and AI capabilities that augmented intelligence allows will deliver the greatest benefits to enterprises.” 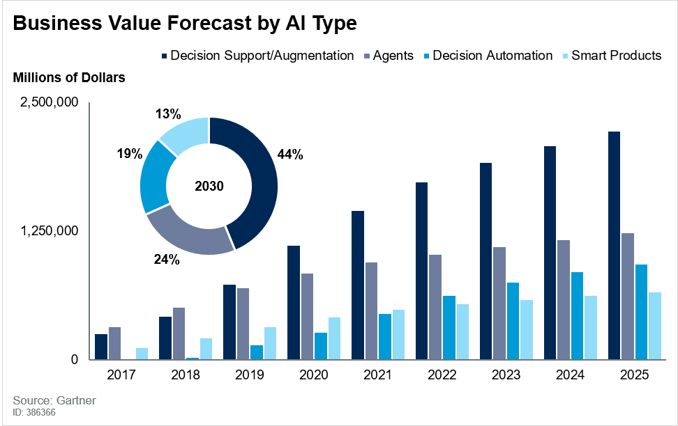 Gartner expects the greatest benefits to be decision support and human augmentation to improve customer experience. By 2030, decision support/augmentation will surpass all other types of AI initiatives to account for 44% of the global AI-derived business value, says Gartner.

“Augmented intelligence reduces mistakes while delivering customer convenience and personalisation at scale, democratising what was previously available to the select few,” says Gartner in a statement.

“The goal is to be more efficient with automation, while complementing it with a human touch and common sense to manage the risks of decision automation,” says Svetlana.

It’s no longer about humans verses machines. “The excitement about AI tools, services and algorithms misses a crucial point: The goal of AI should be to empower humans to be better, smarter and happier, not to create a ‘machine world’ for its own sake,” adds Svetlana. “Augmented intelligence is a design approach to winning with AI, and it assists machines and people alike to perform at their best.”

Gartner’s research is echoed in other recent findings. Academic research by Automation Anywhere, an Enate partner, found there’s been a shift in collective thinking about the impact of automation.

The study shows that the majority (72 per cent) of workers surveyed don’t fear automation or AI and two thirds (66 per cent) actually want to know more about how the technology can help them do their jobs better.

“The future of the augmented enterprise is clear: a blended workforce of human workers and intelligent automation technologies, in which both machines and people can do what they do best. Let machines be machines, working on repetitive, consistent, and precise processes. And let humans be human, where they can be strategic, imaginative, and engaged, doing things that only humans can do, says James Dening, VP and Digital Worker Evangelist at Automation Anywhere.

Other AI experts are recognising the limits of algorithms. Renowned AI start-up Mind Foundry, which spun out of University of Oxford’s Machine Learning Research Group in 2015, says its machine-learning algorithms are helping clients to make better use of data to gain deep insights about their businesses. However, speaking to Raconteur, chief executive Paul Reader readily admits there are certain things that algorithms will never be able to do without a human there to guide them:

“Automation is not the future, human augmentation is,” says the former Oracle director. “Algorithms can’t tell you how you can create value in your business, asking those sorts of questions is an innately human capability. Algorithms rely on humans having done that work first.”

The right expectation for AI is much more one of augmentation vs automation, agrees Tom Wilde, CEO of intelligent process automation firm Indico.

“The analogy we most often like to use is that rather than the popular image of an army of robots showing up to displace people, the better analogy is knowledge workers who are fitted with AI to enable them to accomplish previously impossible tasks because of a powerful set of augmented capabilities delivered by AI.”

Emerging technologies in the Fourth Industrial Revolution will make work better, make humans more productive and create the greatest business value through its supporting role rather than replacement.

Writing in the Financial Times, Naomi Climer of the Institute of the Future of Work, and former president of the Institution of Engineering and Technology, says the ability to make work better is a choice rather than an inevitability, however.

“Whether the inevitable robots replace us at work or make our work happier and more rewarding — that is in our hands,” writes Naomi.

“This means designing the technological augmentation of tasks with the experience of workers as the priority; asking how automation can improve workers’ lives and enhance productivity, not how it can simply replace human work or create new processes that alienate human beings from the world of work.”

The potential is real: research published last year by a team led by Chris Brauer at Goldsmiths, University of London, showed that organisations augmented by automation technologies are 33% more likely to be human-friendly, and have employees who are 31% more productive. “That’s an astonishing double-win: happier employees, assisted by technology to get a third more done with their time,” comments Naomi.

“In the end, the fourth industrial revolution will bring with it massive new automation. It will not drive humans from the labour market entirely. But the choice will be between human workers left to sweep up after robots and robots who are there to boost happiness and productivity for workers. This will not happen organically; it needs us to be vigilant and to design the tools and the processes to tell the difference between these two approaches.”

The opportunity to create the greatest business value lies in AI augmentation. But it’s up to you within your business to design the processes for augmentation to thrive. Enate is a service orchestration SaaS platform that’s designed to manage a hybrid workforce of humans and technology. Enate helps you gain snapshot insight into your business to make better decisions, plug and play different technologies from different vendors – and keep a human in the loop. Find out how Enate can enable augmentation at your business by requesting a demo.

The future of artificial intelligence?

How long should augmentation be the mainstay of your technology strategy?

Stephen Farkouh, chief information officer at Windstream Enterprise told CMSWire the human partnership aspect of augmented AI is only an angle until such time that AI has progressed to a point that we can trust it to operate autonomously and have figured out, as a society and governing body, how to manage through the disruption.

“It makes people feel better to hear that AI helps versus replaces jobs, and that is true right now while AI solutions are in their infancy, but I have no doubt that the models and algorithms will progress to a point where bots can assemble information as good as and likely better than their human counterparts,” he says.

Stephen believes it will take a long time to develop and harden such technology - and even longer to gain the confidence to use it, resources to secure it and regulations to unleash it.

“At least five years until such time and likely five years beyond it, augmented AI solutions will be the lead AI play and it will be as such in every aspect of the enterprise - crunching and processing data at a rate and scale the brain could never approach.”

Augmentation will reign supreme for at least 10 years in harnessing the greatest business value available to your organisation – but only if you adopt the right strategy to using new technologies. Let Enate help you to achieve the greatest ROI. Find out more about service orchestration.