Around the World with UiPath: Part 2 - London

At the end of November, the Enate team was delighted to attend and exhibit at our second UiPath event in quick succession. UiPathForward London was just as good as its NYC counterpart earlier in the month, really busy and full to the brim with automation speakers, influencers and decision makers; to see such an organised and incredibly popular event is making us even more excited about the recently announced strategic partnership between UiPath and Enate.

Here are the team’s four key observations from our post-London debrief:

At least 20 different companies spoke to Enate CEO Kit Cox on the problems of governance between the human and robot worlds. We were pleased to be of such interest when people wanted to know how to deal with the ‘edges around bots’, which were noticeably fraying. We recommended our online guide more than once!

The ‘Route to AI’ features heavily on a lot of roadmaps

RPA as the ‘Route to AI’ seemed a key part of many companies’ future automation journeys. We’re not sure if this all makes perfect sense just yet; after all RPA is a capability more than anything. The smart focus should be on AI-supported RPA with machine learning tools used to learn rules. Spreading thinner than that surely risks losing the benefit of focus.

New jobs are nothing new

With so much noise around the percentage of jobs for the future generation that don’t currently exist, we thought we’d survey the current market. Kit was sure that his job didn’t exist when he was in primary school – maybe frequent job evolution was simply a case of ‘plus ça change’?

We put two bowls on our stall and asked attendees to put their business card in one of the two, depending on whether their job DID or DIDN’T exist when they were in primary school. When combining the results with that of our Twitter poll on the same topic, we found that two thirds (67%) of people said that their job hadn’t existed when they were at school. So, the evolution of the job market is nothing new after all… one in the eye for automation naysayers at least.

Finally… UiPath are well positioned to ‘win the RPA race’ 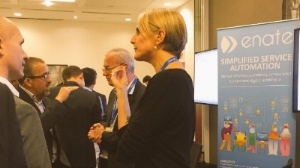 It was clear to Kit and the team at the event that UiPath have the growth curve to be a front-runner in the RPA race. Their culture of openness, straight talking and lack of arrogance came across in spades, and it was a pleasure to share a venue with them in London. Bring on 2018 and the next stage in our partnership!